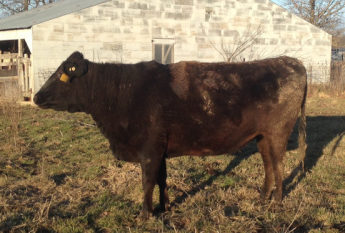 Although we truly respect the breeding plans of great Japanese breeders such as Shogo Takeda and others, we believe that the USA beef and cattle industry offers new challenges for the Wagyu cattle.

First in Japan, most Wagyu calves are creep fed at 2 months of age and mothers are confined to pens rather than pastures as we see in the USA cattle industry.  Pastures in Japan are used for raising crops such as rice and the only grazing areas are on mountainsides which raise too much risk for the Japanese cattleman at loss of his cows.  Thus, the wagyu cattle are raised in pens on full feed with their calves.

In America and other parts of the world such as Europe and Australia, cattle are raised in pastures eating a multitude of forages.  They are not confined eating high quality grains as this is not cost effective to feed cattle 24/7 their entire lives.

Thus, we must study closely our 3 main strains to black wagyu to understand our most suitable solution to solve this issue:

These are the smallest of the 3 main strains brought to the USA. Tajima Strength is their ability to produce the snow white marbling.  This is the only strain in Japan that can be called Kobe Beef.

Bulls from this region include 068 and kikayasu 400.

Tajima weakness is they have the least milk, smallest frame, smallest ribeye, lowest weaning weights, and lowest feed conversion.  This strain will particularly struggle raising calves in a pasture setting as they were never bred to do so in Japan.

The Shimane strain are larger framed with much better maternal traits.  Farmers from this region of Japan sought out the best genetics from other regions to produce these cattle.  Superior milk and growth were targeted by farmers. Weakness of these cattle is marbling is less than the other two strains.
Bulls from this region include Itomichi and Hiratafuji 402.

The cattle in this group mostly come from genetics of Kedaka whom was a top bull from the 1950's.  They are the largest framed cattle of the 3 strains that have great maternal and growth characteristics.  They also marble very well.

Thus, our philosophy for raising quality American Kobe/Wagyu cattle is to concentrate on the two larger framed cattle strains.

There are only two bulls semen that has ever been available that are primarily from the Kedaka/Tottori strains: 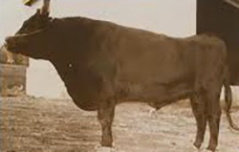 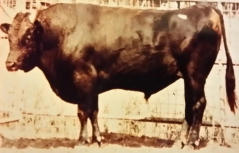 B) Mazda-Original Import from 1976 of Morris Whitney.  About 30 units is estimated to still exist in 2017 and currently sells for $4500/unit if you can find it.  We are one of the only ranches to own mazda semen and embryos. Contact us for embryos available.

Midwest Wagyu has semen on both these bulls and are utilizing it in our breeding program.  We have embryos for sale from these rare genetics.

Once you create a herd that has milk, size, growth, and marbling, you can always cross back to Tajima genetics for "snow white" carcass animals.
If a Tajima bull can make a commercial cross cow produce a calf that can be fed out to reach prime plus, what do you think that same bull can do on a fullblood Kedaka/Shimane wagyu?

Currently we are flushing to the following bulls: Mazda, 005 Shigefuku J1822, JVP Kikuyasu 400, Beijiro, Mt Fuji out of cows including Mazda daughters, Genjiro, Michifuku, Genesis in the blacks.

Get Social With Us

Recommend this page on: